Tell the story through Steven’s eyes. The beginning and the end are already done for you. 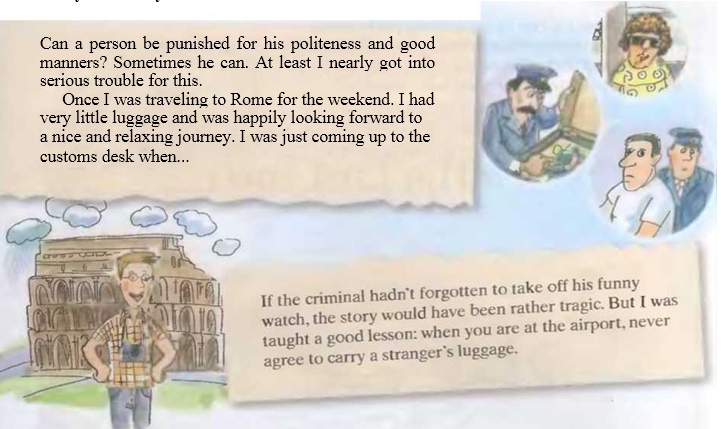 I was coming up to the customs desk when a woman called me and asked me to carry her suitcase through customs, because it was too heavy for her. She was flying to Rome, the same as me, so we had to go through one and the same gate, so of course, there was no problem for me to help her. She said that she had to leave for a while as she wanted to buy some medicine. So I went to the customs desk with two bags, but when the customs officer opened the woman’s suitcase, there was a picture. The officer asked me, if it was mine. I said that it wasn’t mine. Then the officer asked why the picture was in my suitcase if it wasn’t mine. I tried to explain that the suitcase was not mine, but nobody believed me. After a while I saw a man, whose face looked very much alike to that woman’s face. I said to the customs officer that that man was actually that very woman, who asked me to carry her bag. So when the man was going through customs with another suitcase, the customs officer asked him to open it. At first the man didn’t want to do that, as he said, that there were only personal things there. When he opened the suitcase, there we saw a wig, a dress and sunglasses. The officer found that very unusual, but the man said that those things were presents for his friends. But at that moment the officer saw a strange watch on the man’s hand. It was pink and heart-shaped. Then at last the officer understood, that I was telling the truth and decided to arrest the strange man.

a) Match the countries to the nationalities. Listen and check. What nationality are you?

b) Choose a flag and describe it ( END_OF_DOCUMENT_TOKEN_TO_BE_REPLACED )