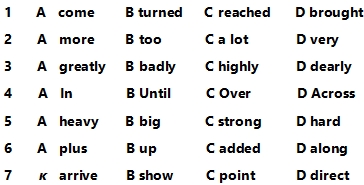 In 1666, London was a city just waiting to burn. Narrow streets were overcrowded with buildings. Open fires and candles burned inside homes and businesses. A long, hot
summer had just 1).............. to an end, and the wood-built city
was bone dry. On the evening of Saturday, 1 st September, Thomas Farynor, baker to King Charles II, went to bed without properly putting out the fire in one of his ovens. Sometime after 1:00 am on Sunday morning, a spark from the fire's embers ignited some straw on the bakery floor. Flames quickly engulfed the house in Pudding Lane. Neighbours attempted to put out the fire, but the flames were 2)                                      fierce. The fire began to spread.
At 4:00 am London's mayor, Sir Thomas Bloodworth, was woken up. He was advised to have all the neighbouring houses demolished, as this would stop the fire spreading,
but the Mayor refused to give the order. He paid 3).................. for
this decision. By early morning, three hundred houses were on fire and winds from the east were causing the fire to spread with frightening speed.
).............. the next three days and nights, the fire raged
out of control. It took until the evening of Wednesday, 5th
September, when the 5)................ winds finally died down, to
bring the fire under control.
When the fire was totally extinguished on Thursday, 6th
September, five-sixths of the heart of the city had been
destroyed. Over 13,000 houses, 87 churches and 4 bridges,
6)........... with many important buildings, such as St Paul's
Cathedral, were gone. Astonishingly, however, it is thought
that fewer than ten people died in the blaze!
If you visit London
today, you can see a tall
column - called The
Monument -
commemorating the
Great Fire. It stands at
220 feet tall - the distance
from its location to the
site of Thomas Farynor's
bakery - so if it fell over in
the right direction, it
would 7)............. to the exact
spot where the fire started!

Work in pairs. Take turns to offer help e.g. to
buy some cough syrup, make a hot drink, call a
doctor, help with the ( END_OF_DOCUMENT_TOKEN_TO_BE_REPLACED )

Какие слова пропущены в тексте?
Read the text and complete the gaps with the correct word formed from the words in brackets. ( END_OF_DOCUMENT_TOKEN_TO_BE_REPLACED )