Continue the story. Use these words: out of the blue, mug, grab, attack, threaten, identify, criminal 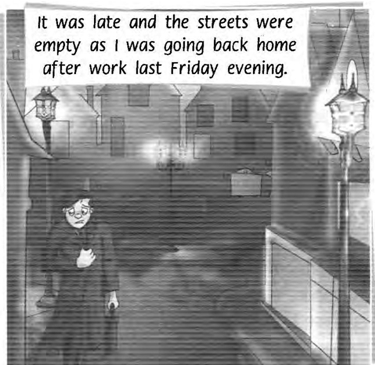 Continuing a story
•      Read the beginning of the story aloud to the
class and explain the task. Draw Ss' attention
to the vocabulary given.
•      Ss complete the task in small groups.
•      Select some groups to tell the whole story to
the class.
Suggested Answer Key
Then out of the blue someone jumped out in
front of me and started to threaten me, saying,
“Hand over your purse, or I’ll hurt you.” I was in
a state of shock as it was the first time anyone
had tried to mug me. At first I didn’t want to
give him what he wanted, but when he attacked
me with a knife I knew I had to do as I was told.
I held out my purse and he grabbed it from me
and ran away. Luckily, I was able to give the
police a good description of the criminal and
they caught him soon after. I identified him as
the mugger and he was given a prison sentence.
Words of Wisdom
•      Draw Ss'attention to the proverb.
•      Elicit whether Ss agree or disagree with the
proverb and ask Ss to justify their opinions.
•      As an extension, Ss could suggest similar or
other proverbs on the topic from their L1 and
translate them into English.
Suggested Answer Key
I agree with the proverb because although
some crimes may have a financial gain, usually
criminals end up in jail or living a violent and
unhappy life. Committing crime will not
improve your life but rather make it worse.

Think of ten new words/ expressions you have learnt during this lesson. Make sentences using them.

Say you are fond of both things.

Example: I am fond of both fruit and vegetables. ( END_OF_DOCUMENT_TOKEN_TO_BE_REPLACED )