a)  Read the possible beginnings and endings of a story entitled ‘Lost in a Blizzard’. Which (A or B) are the most interesting? Why? Which techniques do they use? 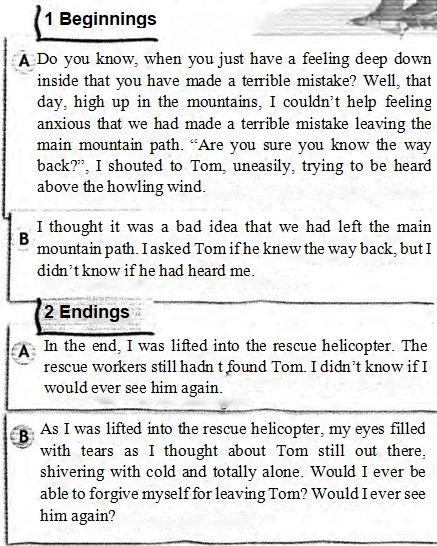 b) Write an interesting beginning and ending for a story entitled ‘Disaster at Sea!’ Exchange with a partner and evaluate each other’s work.

a) Analysing beginnings and endings of a story
•      Ss' books closed, brainstorm ways to (i)
start a story and (ii) end a story. Write Ss'
ideas on the board.
•      Ss' books open, read through the ways
suggested in the theory box.
•      Write up the title “Lost in a Blizzard” and
explain it is the title of a story.
•      Draw Ss' attention to the two suggested
beginnings and endings and explain the task.
•      Ss answer individually and then compare
ideas in small groups.
•      Invite groups to feed back to the class.
Answer Key
A is the most interesting beginning because it
creates atmosphere, uses direct speech,
expresses someone’s feelings or mood and asks
a rhetorical question.
B is the most interesting ending because it
describes feelings and mood, creates
atmosphere/suspense/mystery and asks
rhetorical questions.
b)  Writing a beginning and anding for a story
•      Write the title ‘Disaster at Sea' on the
board. Brainstorm ideas for the content of
the story as a class.
•      Explain the task. Allow Ss time to write
their answers individually.
•      Ss exchange work with a partner for
evaluation/peer correction.
Suggested Answer Key
Beginning
Why did I listen to Stan? We should never have
gone out on that windswept, stormy day. As we
got in the boat, the sea roared and raged.
Shouting over the howling wind, I cried,
‘Perhaps we should stay on land?’ but Stan
carried on preparing the boat, unaware that
this day would be his last!
Ending
Waking up on the cold, hard rocks, I looked
around for Stan, but he was nowhere to be
found. I staggered home to the warm embrace
of my worried parents. Stan was never found
and to this day, when I look out to sea, I think of
my friend and wonder if, somewhere, somehow,
he managed to survive that fateful day

Work in pairs. Take turns to offer help e.g. to
buy some cough syrup, make a hot drink, call a
doctor, help with the ( END_OF_DOCUMENT_TOKEN_TO_BE_REPLACED )

Какие слова пропущены в тексте?
Read the text and complete the gaps with the correct word formed from the words in brackets. ( END_OF_DOCUMENT_TOKEN_TO_BE_REPLACED )