Change the verbs at the end of the line into nouns or adjectives and complete the sentences. The first one is done for you. 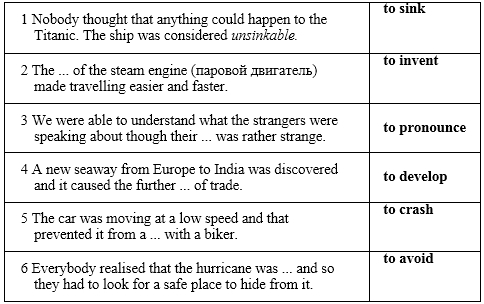 Поменяйте глаголы в конце строки на существительные или прилагательные и дополните предложения.
1) Nobody thought that anything could happen to the Titanic. The ship was considered unsinkable.
2) The invention of the steam engine made travelling easier and faster.
3) We were able to understand what the strangers were speaking about though their pronounci- ation was rather strange.
4) A new seaway from Europe to India was discovered and it caused the further development of trade.
5) The car was moving at a low speed and that prevented it from a crash with a biker.
6) Everybody realised that the hurricane was unavoidable and so they had to look for a safe place to hide from it.

Work in pairs. Ask your partner questions to find out what his / her best
mate is like.

a) Match the countries to the nationalities. Listen and check. What nationality are you?

b) Choose a flag and describe it ( END_OF_DOCUMENT_TOKEN_TO_BE_REPLACED )