Look at the title of the story and the picture. What kind of
story do you expect to read? What could it be about? 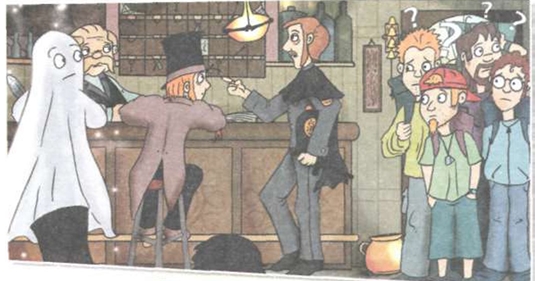 The Ghostly Inn
1. Three friends were chatting excitedly as they were driving down to
the south coast of England for their camping holiday. It was getting
dark, so Danny suggested that they find somewhere to stay for the
night. Almost immediately, Mark spotted a small inn by the side of the
road.

2. When they went in, they saw a young policeman talking in the
lounge with some people. What was strange was that the people were
wearing very old-fashioned clothes! Tom took a few photos and they
stayed the night. The next morning, they paid the bill, which seemed
extremely cheap, and then they left.

3. A week later, the friends decided to stay at the inn again on their
way home. Unfortunately, though, they could not find it, so they stayed
somewhere else. As soon as they got home. Tom got his photographs
developed. While he was looking at the pictures of the inn, he saw only
his friends and a small white creature behind them.

4. Tom felt very troubled, so he went back with Danny to find the inn.
When they arrived where they thought it had been, all they could find
were two ruined buildings. Puzzled, they asked a passer-by about the
inn. ‘Oh, there used to be an inn here,’ the old man told the boys, ‘but it
closed about a hundred years ago. There was a police station right next
to it.’ Immediately, both boys remembered the policeman they had
seen sitting in the inn. They both gasped in horror. They had spent the
night with ghosts of the past!

2.
Put the verbs in the brackets into the correct tense.
Compare with a partner. ( END_OF_DOCUMENT_TOKEN_TO_BE_REPLACED )

a) Sort the adjectives into positive/negative. Compare with a partner.
sociable selfish rude          helpful        ( END_OF_DOCUMENT_TOKEN_TO_BE_REPLACED )