a) Look at the picture and listen to the
rhyme. What do they tell us about the
Great Fire of London?
b) How do you think the fire started and why did it spread so quickly? Read the first paragraph of the text to find out 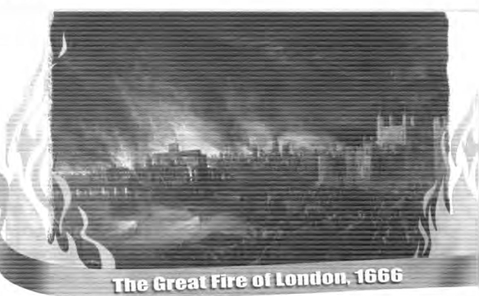 In 1666, London was a city just waiting to burn. Narrow streets were overcrowded with buildings. Open fires and candles burned inside homes and businesses. A long, hot
summer had just 1).............. to an end, and the wood-built city
was bone dry. On the evening of Saturday, 1 st September, Thomas Farynor, baker to King Charles II, went to bed without properly putting out the fire in one of his ovens. Sometime after 1:00 am on Sunday morning, a spark from the fire's embers ignited some straw on the bakery floor. Flames quickly engulfed the house in Pudding Lane. Neighbours attempted to put out the fire, but the flames were 2)                                      fierce. The fire began to spread.
At 4:00 am London's mayor, Sir Thomas Bloodworth, was woken up. He was advised to have all the neighbouring houses demolished, as this would stop the fire spreading,
but the Mayor refused to give the order. He paid 3).................. for
this decision. By early morning, three hundred houses were on fire and winds from the east were causing the fire to spread with frightening speed.

a)  Generating interest in the topic
•      Focus Ss' attention on the picture and play
the recording.
•      Elicit from Ss information about the Great
Fire of London.
Answer Key
The Great Fire of London happened about 350
years ago and destroyed a lot of London.
b) Reading for confirmation
•      Ss' books closed, ask the questions in the
rubric.
•      Ss' books open, read the first paragraph of
the text as a class and elicit the answers
from the Ss.
Suggested Answer Key
I think the fire started because of an accident.
It spread so quickly because the houses were
made of wood.

London burnt quickly because the houses were
close together and they were made of wood. It
had been a long, hot summer and so it was
easy for the fire to spread. The fire started
because the king’s baker hadn’t put out the
fire in one of the ovens.

Work in pairs. Take turns to offer help e.g. to
buy some cough syrup, make a hot drink, call a
doctor, help with the ( END_OF_DOCUMENT_TOKEN_TO_BE_REPLACED )

Какие слова пропущены в тексте?
Read the text and complete the gaps with the correct word formed from the words in brackets. ( END_OF_DOCUMENT_TOKEN_TO_BE_REPLACED )